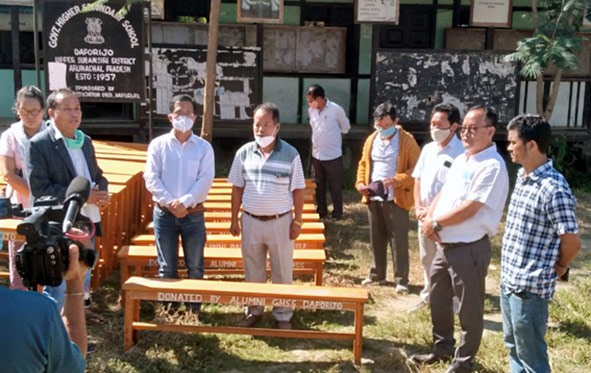 DAPORIJO, Nov 3: In an effort to “rebuild the past glory” of the government higher secondary school (GHSS) here in Upper Subansiri district, its alumni association donated 10 benches and 10 desks to the GHSS’ Principal Babom Bam here on Monday.

The alumni association’s chairman, Dosh Dasi appealed to all ex-students of the GHSS to “extend a helping hand to the association to revive and restore the lost glory of the school.”

Dasi also appealed to ex-students “who are now shining in their respective field of activities in the capacity of officers, public leaders, businessmen and social workers” to cooperate with the association to stop further encroachment on the school’s land.

The association’s secretary, Larji Rigia also appealed to former students of the school to cooperate with the alumni association “in rebuilding the lost school glory.”

The principal lauded the alumni team for their noble gesture.

Last year, the association had hired six teachers for the school with administrative approval and also arranged the salaries for the hired teachers. It also had toilets constructed for the school’s students last year.