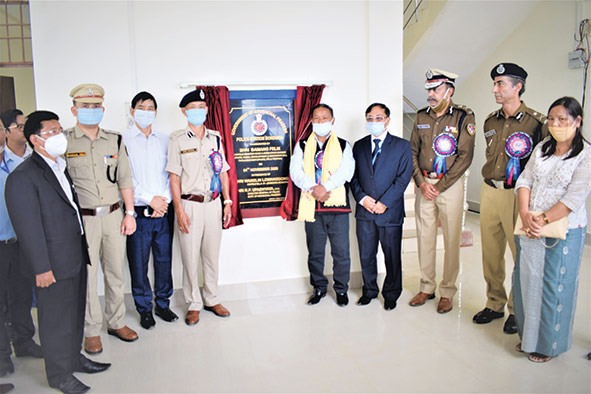 BORDURIA, Nov  4: The home department will not compromise with the safety and security of Arunachal people at any cost, said Home Minister Bamang Felix as he inaugurated the  newly  established police station (PS)  here in Tirap district  on  Wednesday.

“The creation of the new police station doesn’t mean to torture or prosecute innocent public. It is for the safety of common people and will work like a seva kendra,” Felix said.

Stating that “once upon a time, Tirap was one of the most peaceful districts of the state,” the minister urged the people of  the district to bring back the old glory of its town.

“We, the people of Arunachal must live as one irrespective of creed, caste, region and religion,” he added.

The minister also appreciated Borduria-Bogapani MLA Wanglin Lowangdong for creation of the PS and also congratulated the people of Borduria circle in particular and people of Tirap in general for the new police station.

Responding to the public memorandum, Felix assured to fulfil the demands for construction of police officers quarters, 20 bedded police barrack and Panchayat Hall at Borduria.

Earlier, Felix paid homage to  the portrait  of martyr Hangpan Dada at Borduria.

MLA Lowangdong, in his speech, said that creation of the new police station is a great achievement for the people of Borduria circle, adding that “the state police force is second to none in maintaining law and order.”

DGP RP Upadhyaya informed that 10 new police stations will be inaugurated in the state during the month of November.

He also appreciated DIGP (TCL) and all the police personnel serving in TCL districts for their dedicated services, and assured to extend all possible help from the PHQ whenever necessary.

The Rs 150 lakh police station funded under SIDF was completed in March, 2020  and it has been executed by the PWD and M/s Elija Enterprises.