ITANAGAR, Nov 5: The state BJP on Thursday condemned the arrest of Republic TV editor Arnab Goswami by the Mumbai Police and termed the act “murder of democracy.” 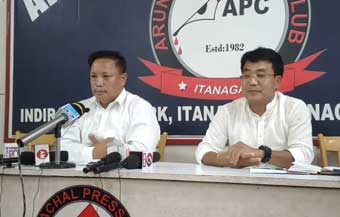 Addressing a press conference at the Arunachal Press Club here, state BJP spokesman Dominic Tadar said that “Shiv Sena has changed its strategy of murdering democracy after being misguided by the INC” and is now silencing journalists for asking questions.

Tadar said that the “son of the soil” (Goswami) has been falsely implicated by the police at the behest of the Maharashtra government under its chief minister Uddhav Thackeray, which Tadar said is “condemnable and intolerable.”

When asked why the BJP, which has remained silent over various instances of atrocities against journalists even in the Northeast, was taking sides with Goswami, Tadar said, “We cannot remain silent when democracy is being murdered so openly.”