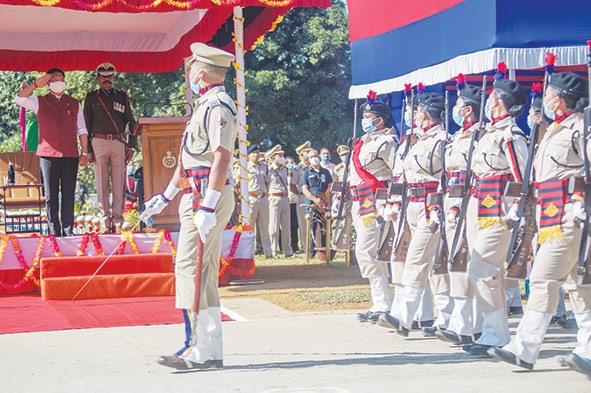 Attending the celebration, Chief Minister Pema Khandu paid tributes to the martyred police personnel at their memorial site, and inspected the march-past. He later released the vision document 2021-2026 of the APP, themed, ‘Smart police for safe Arunachal’.

Addressing the gathering, the chief minister said the state government is committed to modernizing the state’s police force, and informed that Rs 137 crore had been earmarked the previous year. He commended Home Minister Bamang Felix and the police department for utilizing the fund optimally.

On strengthening of the police force, the CM informed that new police stations in Kameng Bari, Dollungmukh, Shantipur, Borduria and Vijoynagar have been made functional, besides the new women police stations in Pasighat, Tawang and Ziro.

Khandu also informed that the state government has made the fire stations in Anini, Longding and Bhalukpong operational, and the ones in Pasighat, Anjaw and Naharlagun are waiting to be completed. On police mobility, the CM informed that the department has procured 174 new vehicles, including nine bulletproof vehicles.

Speaking on police reform, the CM informed that “the biggest reform it saw this year is the common cadre system with prospective effect. Once it is implemented, the policing system will be improved, well-managed and disciplined.”

Lauding the role of the police in fighting Covid-19, Khandu urged the police to play an active role in bringing closer the diverse communities of Arunachal. He suggested forming an association of police wives, “which could be along the line of the army wives welfare association that could play an active role in bringing positive change in the society.”

Promising full support from the government, the CM said such an organization could use its network to work for the empowerment of youths and women, and also facilitate skill development.

On his vision with regard to policing, the CM outlined the major initiatives to be launched, such as new infrastructures for the police, training in firearms, upgrading the training infrastructure, better traffic regulation, strengthening of tourist police, raising of STF for insurgency affected areas, etc.

Taking strong exception to “illegal drug activities” by police personnel, the chief minister vehemently condemned the alleged involvement of uniformed personnel in drug deals. Warning of strict action, he said “any police personnel involved will be arrested and stripped of their jobs.”

Stating that there would be no compromise in fighting the drug menace, the CM directed the police department to act tough on illegal drug business.

Committing to carry on his fight against corruption in the state, Khandu lauded the role of the SIT and the SIC in unearthing several corruption cases, and promised to work for strengthening these investigating agencies.

Later in the day, the CM flagged off 54 police vehicles which are part of the emergency response support system and will be placed at various towns across the state to improve police response.

For the first time in Arunachal, ‘DGP’s commendation discs’ were awarded to 30 police personnel, from IPS officers to constables, for their extraordinary services. The awards were handed over by the chief minister in the presence of Speaker PD Sona, Home Minister Bamang Felix, RWD Minister Honchun Ngandam, Education Minister Taba Tedir, MLAs and top officials from the police department. (CM’s PR Cell)