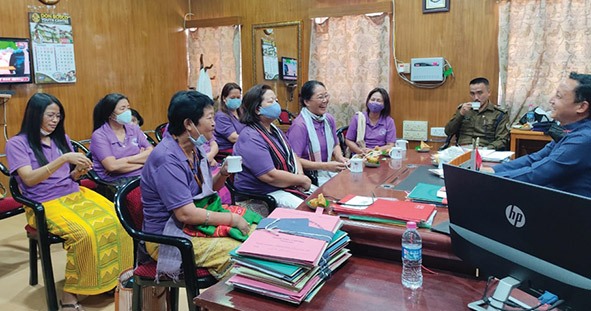 ITANAGAR, Nov 11: The Arunachal Pradesh Women’s Welfare Society (APWWS) has apprised the capital SP Jimmy Chiram regarding several issues and discussed ways to curb crime against women and children in the region.

A team from the society met the SP and other officers at his office on Wednesday during which the APWWS team apprised him about the various places which are frequented by the anti-social elements. The team further appreciated the capital police for “waging war against drug peddlers.”

Gumri Ringu, the president of the society, requested the SP to install mast lights and CCTV in the “crime-prone areas” within the Capital region.

APWWS secretary general Kani Nada Maling requested the SP to keep aside one vehicle for rescue of children and women in need of help. She further requested for one counsellor to counsel the traumatized women and children who are survivors of violence.

SP Chiram said that his endeavour will be to streamline the system and sought the cooperation of the society.

The APWWS also handed over some cotton-made masks to the SP.