ROING, Nov 20: The Dibang multipurpose project (DMP) site of the NHPC Limited has been placed on lockdown by the community landowners, owing to the compensation row between the power developer and the landowners. 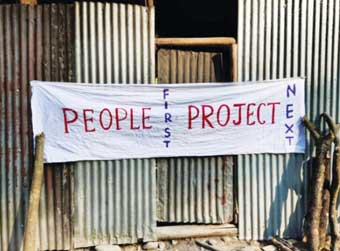 Nearly 100 people, comprising project affected families (PAF), clan members and community landowners last Sunday marched to the DMP sites in Pathar Camp, Panjabi Camp and Munli Camp in Lower Dibang Valley district as a mark of protest and locked all the sites down.

The PAFs informed that they have asked all the labourers and staffs at these sites to leave immediately and not come back until the land compensation is paid by the NHPC.

Banners and posters reading ‘People first, project next’, ‘This is not Faridabad, respect the land’ and ‘This is Arunachal, respect the tribes’ were erected and pasted all around the sealed sites.

“We are tired of the games played by the NHPC and frustrated at the negligent attitude of the GoAP. Earlier, in their letter to the land management secretary, the CM and the NHPC GM, the clan people and the community landowners had asked the NHPC to cease all kinds of project works until the vexed issue of land compensation is resolved,” the PAFs informed.

“I don’t want to see these people anymore. My life has become very difficult,” said Tisa Linggi, who used to reside near the proposed dam axis site.

Kotosi Menda, one of the members, said the community people have waited for three years since the land compensation award was made on 15.12.2017. He added that the local people have decided to launch a democratic movement with the help of the local students’ union in Dibang and Lower Dibang Valley districts from 15 December onwards, “but it is likely to be postponed due to the upcoming panchayat election.”