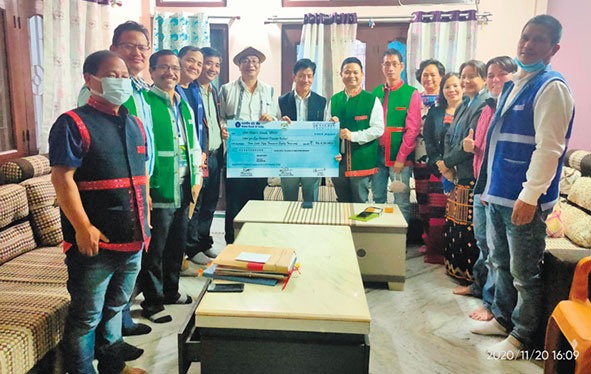 EGO, Nov 21: The Adi Bane Kebang (ABK) handed over Rs 4,50,083 to the Galo Welfare Society (GWS) on Friday as financial aid for the families affected by the flood that had occurred on 17 September in Ego valley in Dari circle of Leparada district.

The devastating flood left behind a trail of devastation. Two lives were lost, many have been rendered homeless, business establishments were washed away, and WRC, agricultural and horticultural lands suffered severe damages.

ABK president Getom Borang said, “ABK is indebted to the humanitarian gesture initiated by GWS for providing financial aid to the 25 March fire victims of Kaying village in Siang district, wherein around 54 houses along with a community hall were reduced to ashes. As a reciprocal gesture to the help bestowed by GWS, the Adi community has volunteered to donate for the cause of flood victims of Ego valley.”

GWS president Tanga Kena expressed gratitude to the ABK and said the reciprocal humanitarian gesture by the ABK would go a long way in creating more bonhomie between the two tribes.