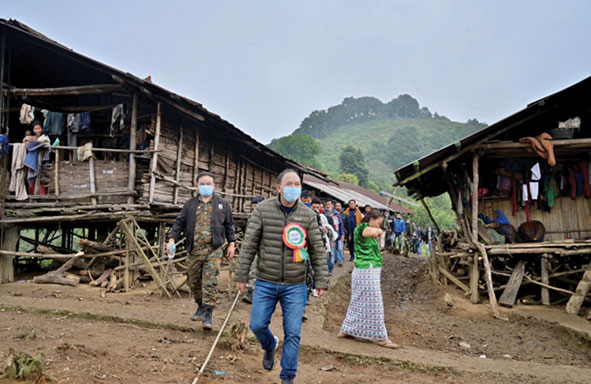 SEPPA, Nov 22: WRD Minister Mama Natung visited Lelung village in Bana circle of East Kameng district on Saturday and inspected the status of the ongoing PMGSY road project from Koto to Lelung village. A span of about 4-5 kms of formation cutting remains to be completed.

Later, addressing a meeting with head gaon burahs, village elders, panchayat leaders, district BJP president Ealing Tallang, mandal presidents and others, Natung said, “I want to make my constituency a model constituency by shunning away money culture and mortgage system. And that has to begin from the grassroots, at the panchayat level.”

He urged the people to live in harmony with nature and desist from hunting and deforestation. He also distributed some blankets and essential food items to the villagers of Lelung.

Tallang said that “the BJP is based on discipline and performance” and expressed confidence that the party would win the upcoming panchayat election.

The minister also inspected the proposed site for an agriculture college in Watte.