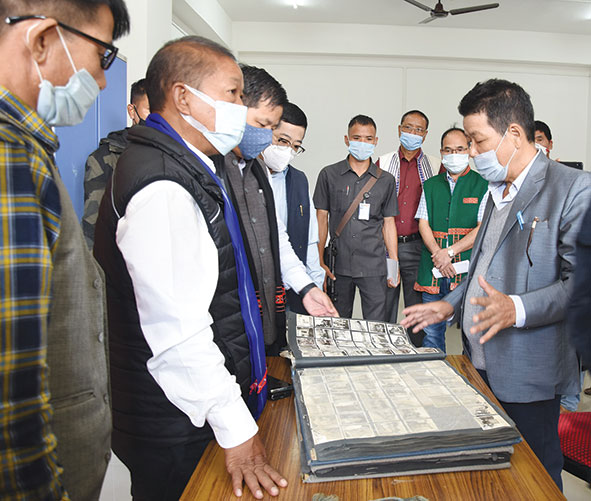 NAHARLAGUN, Nov 23: IPR Minister Bamang Felix exhorted the officers of the Information and Public Relations and Printing department to work harder and beyond the boundaries to educate the entire population of the state on various developmental schemes of the central and the state governments.

Felix said this while reviewing the developmental activities taken up by the department’s two directorates when he visited the Soochna Bhawan here on Monday after taking over the charge of the department for the second time.

his long associations as parliamentary secretary and later as the minister of the department, Felix said that he is aware of the problems and issues in the department and assured to take up some of the key issues and resolve them one at a time.

While inspecting the photo archives of the directorate, the minister was aghast to find the history of Arunachal Pradesh in the form of decaying photos.

“Valuable photos have to be preserved and protected,” he said and assured to take it on priority for its preservation through digitalization of the photos.

Insisting that the officers of the department not only be hardworking but also come up with new and innovative ideas, Felix assured to support any innovative scheme in the next budget.

Reviewing the construction status of the Satyajeet Ray Film and Television Institute, (SRFTI) with the director of the institute, Felix said no compromise will be accepted in its quality as he asked the agencies to speed up the construction works.

He, however, said certain agreements were made with local land donors which need to be addressed with due respect to their culture and sentiments.

Adviser to the IPR Department Laisam Simai, who accompanied the minister, termed the IPR department as “the heart of all departments.”

IPR Secretary NT Glow also accompanied the minister and took part in the review of the developmental activities of the department.