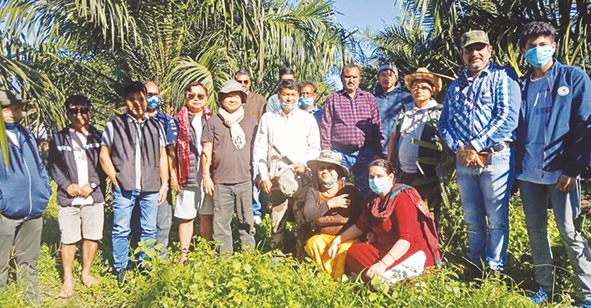 Progressive farmer Dature Miuli, who is also a successful orange producer, started oil palm plantation in an area of 200 hectares in 2017 under the Mini Mission-II of the agriculture department. He is also claimed to be the top-ranking individual oil palm grower in the country.

Mahendra Singh Yadav, state head of the Roing 3F Oil Palm Pvt Ltd, acknowledged Miuli as a role model in the field and said that “the plantation could expect a probable earning of Rs 1 crore @ 100 hectares from the fourth year onwards.”

Miuli expressed appreciation for the Pema Khandu-led state government and other officials for their assistance in developing the plantation.

Cluster Manager Ambika Bharadwaj and PK Ojha from the district agriculture department and other oil palm growers of the area also attended the programme.