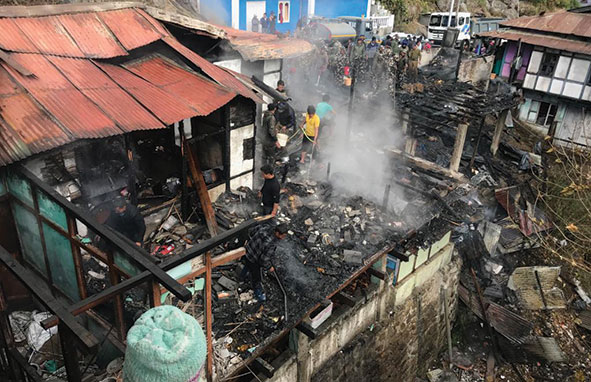 MANGNAM, 4 Dec: At least four houses were reduced to ashes in a fire accident that occurred at Zero Point here in Tawang district on Friday morning.

The fire caused three LPG cylinders to burst, and nothing could be salvaged as the fire devoured the houses with attached shops.

Local MLA Jambey Tashi reached the site and provided immediate assistance to the victims. Expressing shock over the accident, Tashi directed the Lumla administration to provide relief to the victims without delay.

According to a statement by the SDMO, the cause of the fire couldn’t be ascertained.

“There were no casualties as all the houses were unoccupied at the time of fire. Timely volunteering by SSB Lumla and the villagers helped to tame the fire and from spreading it,” he informed. (Mon Tawang Vigilance)