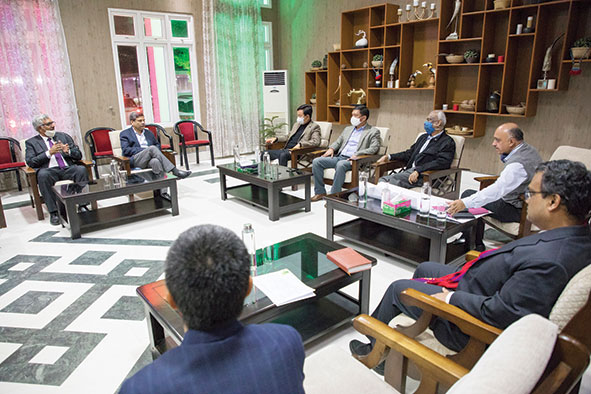 ITANAGAR, 4 Dec: Chief Minister Pema Khandu on Friday held a meeting with the delegates from the union power ministry and officials of the hydropower developer to discuss the status of hydropower projects in Arunachal.

The meeting discussed the 2,000 mw Lower Siang HEP, the 600 mw Kameng HEP and proposed dams on the Siang and the Dibang rivers. The participants agreed that the trust of the affected people must be won and good rehabilitation packages assured.

The participants also discussed developing small hydropower projects in the state as it would have minimal environmental impact and could be completed in lesser time and involve lesser cost. To harness the potential of small dams, the participants felt that it must be supported by a robust infrastructure of transmission lines.

The meeting raised concern over Arunachal being deprived of external funding that could have helped develop big infrastructures in the state. It also discussed the issue of land compensation and allaying fears among the local people vis-à-vis dams.

Earlier, on Thursday, Sahai visited Changlang district headquarters to take stock of the hydropower projects’ status, as well as to assess the future prospects of hydropower development in the district.

During a meeting at the DC’s office there, Sahai, who was accompanied by Joint Secretary (Hydro) Tanmay Kumar, NHPC CMD AK Singh and PGCIL CMD K Sreekant, said that hydropower projects are vital for the development of a district like Changlang, and assured to provide all possible help to get the projects in the district sanctioned.

Earlier, Deputy Speaker Tesam Pongte and local MLA Phosum Khimhun informed Sahai about the proposals for various hydropower projects submitted to the Centre for consideration, and sought his help in getting the projects sanctioned.