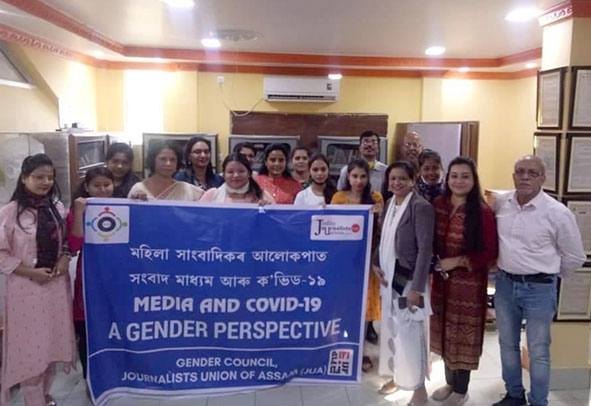 GUWAHATI, 4 Dec: The demand for a ‘pledge of parity’ to ensure equal opportunity for women in workplace and greater task-sharing among all genders at homes was raised at a meet organized by the gender council of the Journalists’ Union of Assam (JUA) to discuss the challenges and possibilities in wake of the ‘new normal’ thrown up by the global pandemic.

Attended by several journalists, including union members based in Guwahati, the meeting discussed the problems faced by journalists in general, with focus on women journalists amid Covid-19, and raised a clarion call for the need to unite to lend strength to their voices.

Citing data from a survey conducted among women journalists across 50 countries, she said that it was found that stress level among the women journalists has increased manifold during the ongoing pandemic as they are having to multitask more compared to the pre-pandemic atmosphere.

She underlined the need for more work-sharing options for women and said, “We should reach out to our male colleagues to make them understand the need to share the workload of their female companions at home.”

IJU president Geetartha Pathak spoke on the need for journalists to unite, focusing on the thrust by the IJU on ensuring equal participation of women in all its activities.

Citing instances when the IJU and the JUA had firmly stood up for journalists’ rights, he added that the unions have been putting constant pressure on the governments at all levels to ensure that atrocities on journalists are not pushed under the carpet.

JUA vice president Bedabrata Lahkar, stressing on the need for journalists to unite, said there is a need to sensitize male colleagues on the issues concerning their female counterparts and also make them understand the need for parity between the genders in true sense of the term, not just in workplaces but also at their homes.

Lahkar called upon the JUA’s gender council to come up with a ‘pledge of parity’ for all journalists to sensitize them further on these issues.

Among the issues raised in the meet on the theme ‘Media and Covid-19 – A gender perspective’ were pay cuts by most media houses, increase in workload without any commensurate raise in pay, and retrenchment of women journalists in greater numbers that of their male colleagues.

The sidelining of reporting on developmental and humane stories during the Covid-19 crisis was also discussed as it proved to be a challenge for reporters covering ‘soft beats’ to generate news or find space for their reports during the period.

The unprecedented crisis also threw up opportunities for the journalists to perform their duties more diligently, which also drew appreciation from the editors and even promotions and greater responsibilities within their organizations in a couple of cases, as shared by a few women journalists during the interaction.

JUA executive committee member Sabita Lahkar, drawing from her own experience, said the women journalists have to fight more for their due credit than their male colleagues, and called upon the youngsters entering the profession to work with sincerity and determination to create their own space.