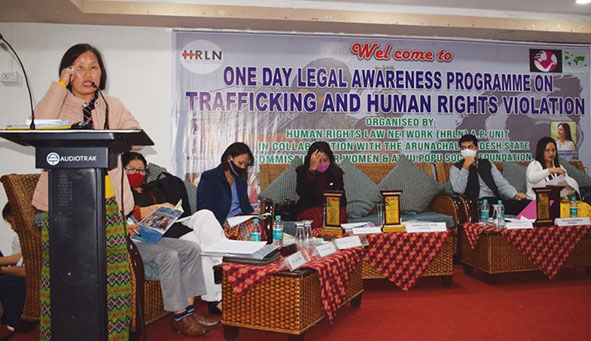 She was addressing a gathering during a legal awareness programme organised by the Human Right Law Networks (HRLN), in collaboration with the APSCW and the Athu Popu Social Foundation, on trafficking and human rights violation at a city hotel here on Saturday.

Techi informed that most human trafficking cases in India are related to those hired as domestic help.

“Human trafficking is also done for sexual exploitation and child or forced marriages and even organs,” she said, adding: “According to a 2014 report, around 16 million women were victims of sex trafficking in one year, and half of them were children.”

While she said that the commission does not receive extremely high numbers of reports of women and child trafficking cases, the state does report high cases of domestic violence, kidnapping and rape, with the capital region registering the highest crime rate against women, followed by West Siang district.

SIT (Crime) SP Rohit Rajbir Singh spoke on the role of the police and the civil society for prosecution of perpetrators.

APSCW member Techi Hunmai spoke on the powers and functions of the commission.