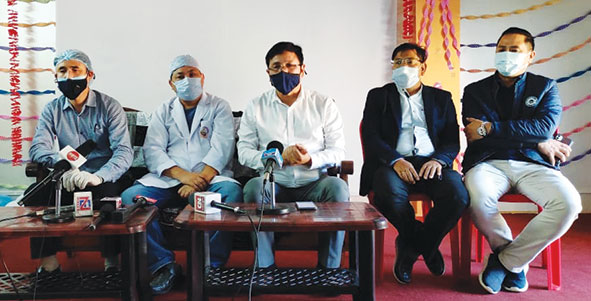 Representing doctors assembled at Heema Hospital here to show solidarity and support to the central team of the IMA, state IMA president Dr Lobsang Tsetim said, “This is against the very concept of modern medical practice. Modern medicine is totally an evidence-based concept and AYUSH, which includes Ayurveda, yoga, Unani, siddha and homeopathy, has its own separate branch.”

“The CCIM notification is shocking as it goes against the Supreme Court order,” he said.

“The government probably wants to fulfill the shortage of doctors in rural areas, but this will work against their favour ultimately as it will promote quackery and increase complications and affect the healthcare delivery system,” Dr Tsetim said.

IMA-AP vice president Dr Kesang Wangdi Thongdok informed that “the protest is against ‘mixopathy’ – a mixture of allopathy and the Indian medicine systems.”

“Surgery is a branch of modern system of medicine and out of the purview of the Indian system of medicine. Allopathy and Ayurveda are completely different branches and they cannot be mixed up, or we will be bringing out half-cooked doctors and not experts,” Dr Thongdok said.

“It requires 9 to 12 years of study in a single branch to become a specialist or a super-specialist. We cannot expect them to catch up to 12 years of study in two or three years. There will be severe lack of knowledge, and going into specialization without any foundation will ultimately be detrimental to the health of the public,” he said, adding: “It is nearly impossible to gain mastery on surgery in two to three years.”

IMA-AP secretary Dr Jego Ori informed that, as per the government notification, AYUSH doctors can pursue postgraduate courses to learn surgery. This includes 39 surgical procedures in general surgery and

19 surgical procedures in ENT, ophthalmology and dental, which the Ayurveda doctors will train for from six months to two years and will be given degrees.

“Surgery requires anatomical knowledge and years of hands-on training, which cannot be learnt within six months or a year’s training. Allopathy medicines are also required for infection control and anaesthesia. We keep learning throughout our lives and the government decides that it can allow doctors to operate with six months or two years of training. Who will be responsible if there are complications? Will the government take responsibility? It won’t,” he said.

While the IMA is strongly against the government notification, the IMA members here univocally said that they are not opposed to the practice of Ayurveda, and suggested developing Ayurveda instead of mixing it with allopathy. The IMA-AP said that it will write to the state government, opposing its implementation in the state. It also asked the health department as to who would shoulder the responsibility if something happens to the patients.

On 11 December, the IMA will hold a nationwide closure of all OPD services, except for Covid. However, taking into account that there are limited numbers of doctors in Arunachal, the IMA here will not be closing down its services. Its members will, however, participate in a token strike, wearing black badges in support of the national IMA team.

“If the government does not listen to our demands, we will likely go on a full-fledged strike,” Dr Ori said.

Members of the IMA MSN also held a hunger strike in front of the National Medical Council’s office in Delhi.