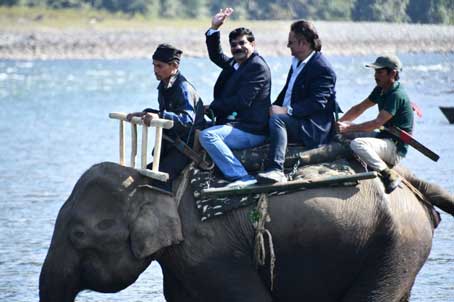 MIAO, 17 Dec: The official website of the Namdapha National Park & Tiger Reserve (https://namdaphatigerreserve.org) was launched by PCCF & Head of Forest Force, RK Singh during his visit to the national park here in Changlang district on 14 December in the office of the CF & Field Director.

Singh lauded the efforts put in by Field Director Tapek Riba and his team on the website.

“The much-needed website is now a reality and the park authority should make best use of the website to showcase the uniqueness of Namdapha to the world. It should be updated regularly with every activity undertaken in the park. It should also serve as a tool for promoting ecotourism in the park,” Singh said and suggested opening official social media accounts of the national park, such as on Facebook, Twitter, etc.

Riba informed the gathering that the website has been constructed with a view to cater to the needs of the researchers, scientists, tourists and general public all alike.

“Researchers can get full access of scientific data of the park as also the tourists who can gain information on tourism activities in and around the park. For the convenience of the tourists, the website is equipped with online booking system. The general public can gain information of developmental activities being taken up in the park which are available in the public domain,” he said.

He also expressed his gratitude to the National Tiger Conservation Authority for providing required fund for hosting the website.

Later, the PCCF visited the Deban camp and interacted with the field staffers and advised them to work sincerely to regain the lost glory of Namdapha.

He also interacted and offered his guidance to the National Geographic Team that was here on a project assigned to them by the state government.