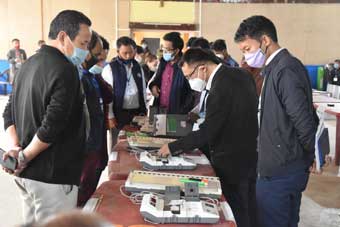 The EVMs have been kept in the strong-room under the strict vigil of the security personnel.

The commissioning process was supervised by in-charge of the EVM EAC Lod Takkar and Dy Director RK Sona, and led by the team of engineers from Electronic Corporations of India Limited, Kolkata.

The MROs, AMROs, candidates and their representatives/ election agents etc were also present.

The Itanagar Municipality election will witness poll on 22 December across 15 wards as corporators of five wards- 12, 14, 18, 19 and 20 have already been elected unopposed. (DIPRO)