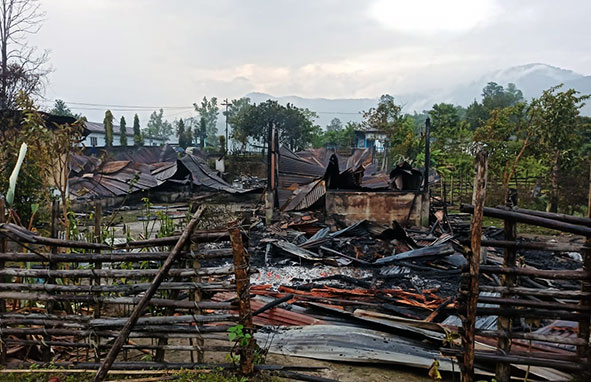 KAMBA, 18 Dec: Five units of teachers’ quarters and a ministerial staff quarters in the premises of the government higher secondary school here in West Siang district were burnt to ashes in a fire accident that occurred on the intervening night of 17 and 18 December.

No casualty has been reported.

The fire is said have started at around 11:30 pm in the kutcha kitchen which was adjacent to the barrack. The fire tenders from Aalo could not reach on time to extinguish the blaze.

blankets, mats, flashlights and edible items to the victims. The victims are temporarily sheltered at the school’s new RCC girls’ hostel.

Kamba ADC Rujum Rakshap, who also rushed to the spot, has constituted a board and is working on providing immediate relief to the affected families.

DDSE Eto Ete along with executive members of the ATA contributed Rs 50,000, while Lojen Kamcham president Mardo Bogo contributed Rs 20,000 to the victims, and requested the administration to provide immediate relief to the affected families.

Kamba is a thickly populated ADC headquarters with a college, a higher secondary school and big villages in its vicinity. The need of a fire station is very essential in the subdivision. (DIPRO)