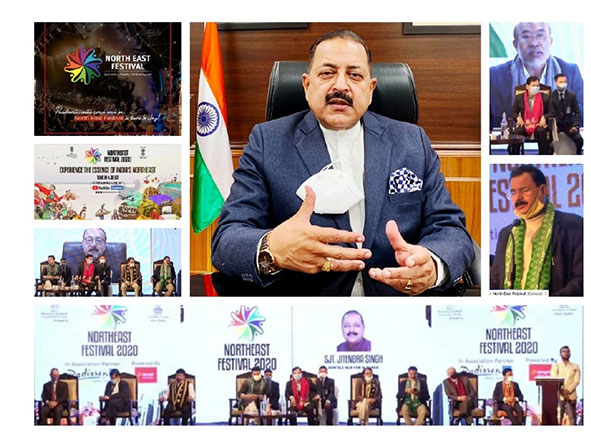 DELHI, 19 Dec: Union MoS (Independent) for Development of North Eastern Region (DoNER) Dr Jitendra Singh on Saturday said that the northeastern region (NER) would emerge as a favourite tourist and trade destination in India in the post-Covid era.

Speaking during the 8th Northeast Festival, which was organized virtually, he said that the NER would emerge as an economic power with the support of its huge natural and human resources.

The minister said the region would work as a “new engine to the economy and emerge as an alternative to the European tourist destinations by virtually remaining pandemic-free when other parts of the world are infested with the coronavirus.”

Dr Singh expressed hope that holiday lovers would prefer the NE region from the next season onwards “for its pristine natural beauty over other global tourist destinations.”

He said that the region would exploit its vast untapped natural resources, including bamboo, “which could propel the Aatmanirbhar Abhiyan of Prime Minister Narendra Modi by imbibing ‘Vocal for local’ mantra.”

Dr Singh said that the central government recently raised the import duty on raw bamboo items by 25 percent, which he said would help domestic bamboo industries like furniture, handicrafts and agarbatti-making in a big way and promote the use of bamboo as building material.

He said there has been a significant development in terms of road, rail and air connectivity, helping facilitate the movement of goods and persons not only across the region but also across the country.

“The youths of the region have become more aspirational in recent times, and will play an important role to take the region to greater economic heights,” he said.

Referring to the Act East policy of the government, Dr Singh said the NER has a special role to play in the promotion of trade and business relations with the ASEAN countries as it is the gateway to the growing economies of Southeast Asian nations.

The chief ministers of Assam, Tripura, Manipur and Sikkim and senior ministers and officials of the NE states joined the meeting. (PIB)