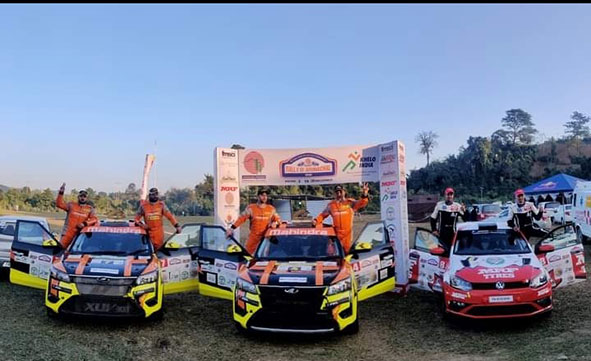 ITANAGAR, 20 Dec: International rallyist Gaurav Gill conquered the Rally of Arunachal, winning both the opening rounds of the Champions Yacht Club FMSCI Indian National Rally Championship (INRC), 2020 here on Sunday, but it was drivers from the Northeast who hogged the limelight with the Arunachal tourism department supporting them in a big way.

The participation of Arunachal drivers in the Indian nationals hit a peak with seven drivers taking part. Out of them, five, including Nabam Asha, were from Arunachal. Lanusanen Pongener of Dimapur became the first Northeast driver to win a round at the national championship, taking a victory in the first round in a dramatic fashion. He was excluded because of an engine which is older than 15 years and did not get a fitness certificate. However, they relaxed the rules and allowed him to take part, and he beat all the biggies and bagged the INRC4 class.

Phurpa Tsering of Dirang won a golden double, taking both rounds in the Arunachal Pradesh Cup. Brothers Hage Chada and Hage Bittu of Itanagar were the driver and navigator pair. Pem Sonam, also of Itanagar, paired with Lenin Joseph of Tamil Nadu, and the only woman driver from the state, Nabam Asha, excelled in her performance with navigator Mahesh Nandi from Bengaluru.

“The Motorsports Association of Arunachal provided sponsor networks and navigators to train the local drivers and it yielded rich results. Support came in a huge way from the tourism department of Arunachal, the police department

and the chief minister to make the event a grand success,” said Lhakpa Tsering, the chairman of Rally of Arunachal.

This was the only high-speed technical and super fast tarmac rally, where a state government promoted, protected and provided security throughout.

Gaurav Gill, the JK Tyre driver with Musa Sherif started off from where he left and, after recording a stellar victory in Round 1 at the time place two days back, posted a total time of 42:15.00 minutes to win the rally and finish the Arunachal leg with a grand double.

Driving an XUV300, the three-time APRC champion looked in top form and dominated the rally right from the word go. He opened up a considerable gap of around 1:51 minutes in the first two night stages on Saturday evening, held onto his lead throughout, and mixed aggression with caution perfectly to win all the six special stages, including four night stages, to consolidate his position at the top of the leaderboard.

His teammate Amitrajit Ghosh along with co-driver Ashwin Naik clinched the second place after posting a total time of 43.48.1 minutes. Amitrajit, driving an XUV300, who has been battling car issues for more than a year now, was impeccable behind the wheels and drove with great precision for his first podium finish of the season.

Defending champion Chetan Shivram (& Rupesh Kholay) of Yokohama Tyres, who had a DNF in the last round, started the round with a stock engine car, and despite driving a vehicle with different specs did well to finish the overall 13th to take valuable leg points and hope for a turnaround in fortunes in the remaining rounds.

Karna Kadur of MRF Tyre also continued his good run and after finishing runner-up in the opening round claimed the third place. Along with Nikhil V Pai, Karna was constantly pushing Amitrajit but eventually had to contend with third place with a total time of 44:57.3 minutes. His place on the podium also secured his second position on the points table.

In the INRC 2 category, it was Dean Mascarenhas (& Shruptha Padival) who took the top honours by completing the six special stages with a total time of 45:38.6 minutes, followed by Snap Racing’s Sahil Khanna (& Vidit Jain) who took 47.42.0 minutes to finish the rally. Rahul Kanthraj (along with co-driver Vivek Y Bhat) ended up in third place with an overall time of 47:48.8 minutes.

Aditya Thakur (& Virendra Kashyap) of Team Nutulapati won the top place in INRC 3, after clocking a total time 47.24.5 minutes, followed by Fabid Ajmer (& Eldo Chacko) who took 47:30.8 minutes to finish the rally. The last round’s INRC 3 winner, Maninder Singh Prince and his navigator Vinay Padmasali made it to the third place on the podium with a total time of 48:06.4 minutes.

Mujeeb Rahman (& Goutham CP) won the top prize in the INRC 4 category with 50.42.300 minutes, while last year’s winner Vaibhav Marathe and his co-driver Suhan MK, driving for Yokohama Tyres, won the second place with a total time of 51:28.500 minutes. Rohith Iyer (& M Manjunath) took the third podium after registering a time of 54:21.600 minutes.

In the junior INRC category, Harikrishna Wadia (& Chirag Thakur) claimed the top position for their performance of 48:28.21 minutes, followed by Team Yokohama’s Arjun (& Shanmuga SN) who took 48:58.9 minutes to complete their campaign. Pragathi Gowda and her co-driver Deeksha Balakrishna of Team Vasundhara impressed yet again as they finished in third place with a total time of 49:37.7 minutes.