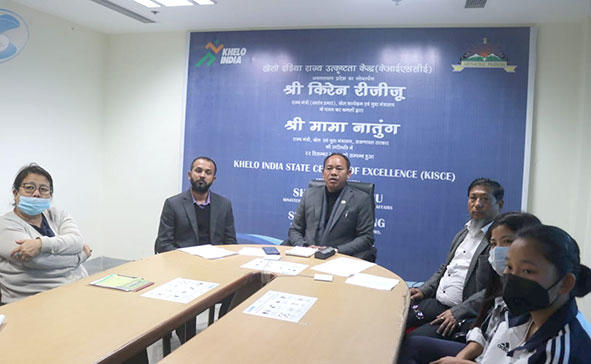 ITANAGAR, 22 Dec: The foundation stone of the Khelo India State Centre of Excellence (KISCE) being established at the Sangay Lhaden Sports Academy (SLSA) in Chimpu here was laid on Tuesday by union MoS (Independent) for Youth Affairs & Sports Kiren Rijiju, in the presence of Sports & Youth Affairs Minister Mama Natung.

The laying of the foundation stone was done through the virtual mode in the presence of Karnataka Chief Minister BS Yediyurappa, and the sports ministers of Kerala, Manipur, Mizoram, Nagaland, Telangana and Odisha.

Seven other Khelo India State Centres of Excellence were unveiled by Rijiju.

Speaking on the occasion, Rijiju said that the launching of the eight new KISCE would serve as a major boost to the development of the sports infrastructure in the country.

“These centres will provide sporting infrastructure facilities to the budding sportspersons of the country. We are starting eight centres on a pilot basis. The government of India will provide the required fund for it,” said Rijiju.

He also said that the Khelo India movement “has become a big brand and it will help India to develop as a sporting hub in the future.”

Natung in his address expressed gratitude to the government of India for choosing Arunachal as a recipient of one of the KISCE being set up in the country.

He stated that the sportspersons and athletes of Arunachal have immense potential but need to be fine-tuned with proper coaching and sporting facilities.

“Under the visionary leadership of PM Narendra Modi, Chief Minister Pema Khandu and Union Minister for Youth Affairs & Sports Kiren Rijiju, the state of Arunachal Pradesh will achieve new heights and tangible achievements in the field of sports. We want to bring medals for the country through athletes from this KISCE,” he said.

The KISCE is being set up at the SLSA, which was established in 1994 and has a total area of 40 acres. The hostel has a capacity for more than 300 athletes and the KISCE will focus on three disciplines: weightlifting, archery and judo.