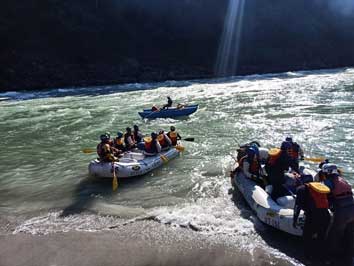 TUTING, 24 Dec: The expedition team under the ‘Brahmaputra Aamantran Abhiyaan’ that had left from Gelling in Upper Siang district on Wednesday reached the Palsi campsite on Thursday.

On Wednesday, the team of eight rafters of the National Disaster Response Force (NDRF), along with four local guides halted at the Tuting campsite as part of one of its activities during the expedition.

On Thursday, the team started from the Tuting halt point at 11:55 am and reached Palsi at around 1:30 pm.