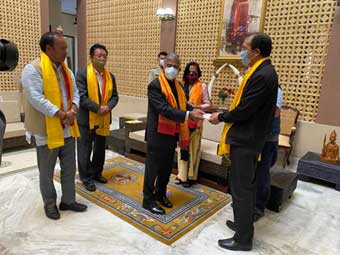 ITANAGAR, 31 Dec: Governor BD Mishra and Chief Minister Pema Khandu on Thursday made their contributions to the state unit of the Shri Ram Janmabhoomi Teerth Kshetra (SRJTK), which has launched its contribution drive in the state for the purpose of construction of the Ram temple campus in Ayodhya.

Minister Taba Tedir, who is also an SRJTK special committee member, said, “The drive would be a national movement and Arunachal Pradesh is the first to launch it today.”

“The national-level committee was formed this year to raise fund through contribution drive for 44 days, and our initiative is the first. The drive will be held across every nook and corner of the state, including border areas. Teams and committees at village levels have also been constituted that will inform about the committee’s initiative,” Tedir said.

“It was decided to start the drive on the occasion of Donyi Polo Day, and it is hoped that the people of the state may support the initiative, so that a huge Ram mandir campus comes up in Ayodhya, which would also be a centre of attraction and a tourist spot,” Tedir said.