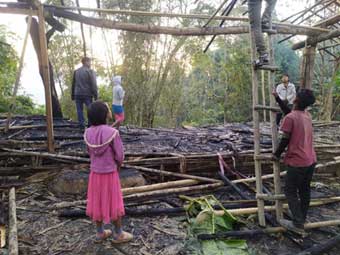 NGINU, 2 Jan: Four houses and a Catholic church were destroyed in a devastating fire which broke out in Nginu village in Longding district on Saturday.

The fire reportedly started at the church at around 3 to 3:30 pm after the conclusion of the new year celebration. The raging fire then spread to the four nearby houses, following which, villagers hurriedly removed the roofs of several nearby houses in order to prevent the flames from spreading.

No casualty has been reported, and the cause of the fire is yet to be ascertained.

One of the members of the Nginu Catholic church informed that the church suffered much loss as all its furniture, musical instruments and other items were completely gutted.

The church member appealed to all well-wishers to extend all possible aid to the affected families.