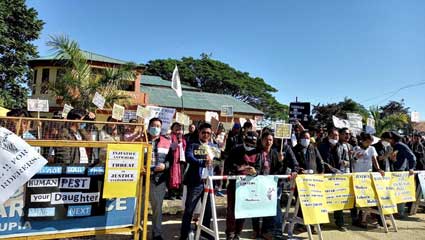 Speaking to reporters here, public prosecutor Manoj Saikia informed that “Kapwang Letey Lowang and Taney Khoiyang had filed bail applications. However, considering the gravity of the case, the court has denied them bail and the order copy will be out soon.”

“The court took note that the accused persons are habitual offenders and have been found to have links with the NSCN (National Socialist Council of Nagaland). They have been charged with a serious offense and the court has rejected the bail plea on those grounds,” he informed.

He also informed that the charge sheet in the case will take “a little more time.”

Also present in the court today, father of late Meena, Techi Kak sought justice for his daughter and said that the main accused and husband of the deceased, Lishi Roni and his other accomplices should be given capital punishment for the crime.

“We seek capital punishment for the accused so that such a heinous crime is not committed against anybody’s daughter or any other woman in the future,” he said.

Earlier in the morning, a group of people had gathered near the courthouse demanding that the bail plea be rejected. They shouted slogans and displayed placards seeking justice for the deceased and capital punishment for all those involved in the murder.

Seven-month pregnant, Techi Meena was allegedly murdered by her hired goons at the behest of her husband, Lishi Roni on 5 November, 2020.

On 5 November, the police here had arrested Dathang Suyang and Roni Lishi on 10 November on charges of murder and criminal conspiracy of Techi Meena Lishi, late wife of main accused Roni Lishi.

According to the statement provided to the police, it was learnt that Roni had been planning to kill his wife Meena for the last couple of months and had contacted his old friend Lowang, who arranged contract killers.

One of the accused, Dathang Suyang had confessed that Roni had asked him to kill Meena, for which he was going to pay him Rs 10 lakhs.

Initial interrogation had revealed that one Damriet Khoiyang executed the crime with a hammer.

The murder weapon (the hammer) was also recovered by the police from the Dikrong riverbed (near the Karsingsa block point) in mid-November.

Taya was reportedly in a relationship with the main conspirator, Roni and the police had said that “prima facie evidence indicates strained relations between Roni Lishi and his wife, late Techi Meena Lishi, as the motive behind the crime.”