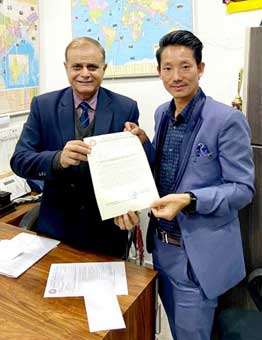 An appointment letter was handed over to Rijuju by KKFI President Sudhanshu Mittal in a ceremony at the KKFI office near Jantar Mantar.

Born on 1st January 1984 to late Najai Rijuju and Malangai Rijuju at Nabolong village of Lada circle in East Kameng district, Rijuju has worked as vice president of the district Bharatiya Janata Yuva Morcha in 2003-2005. He was also the general secretary of the Arunachal Pradesh Youth Congress for two terms.

Rijuju is currently is associated with the BJP as a primary member.