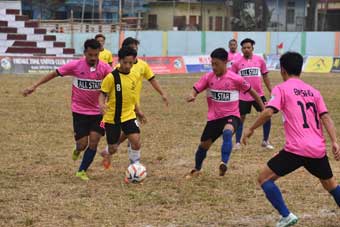 SEPPA, 4 Jan: The Abo Matam FC (AMFC) made a swift win over All Star FC (ASFC) by three goals in the second day of the East Kameng Football Premier League (EKFPL) 2021 played here at the general ground on Monday.

Uri Taju of AMFC scored the opening goal for the club in the 43rd minute of the first half, followed by Gidusow Sanjay and Lingfa in the 63rd and 69th minute of the second half, respectively.

Due to unsporting behavior, Tero Dodum of ASFC was cautioned with a yellow card.

In the second match of the day, Bangtaram Gyadi FC (BGFC) also made a comfortable win over Bana Youngster FC (BYFC). Pani Akash of BGFC scored two goals, leading the team to win the match by 2-0 till the final whistle.

Meanwhile, the final match of the day, Sangcha Ajin FC (SAFC) and Lumdang FC (LFC) ended with a 3-3 draw.

Tagru Tayung scored one goal and Sonu Nabam scored two goals for the LFC, leading the club to a draw with SAFC.