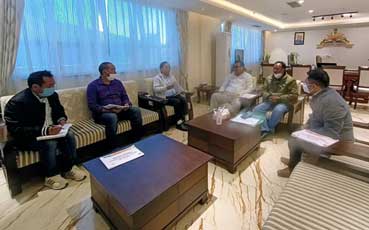 ITANAGAR, 4 Jan: Deputy Chief Minister Chowna Mein has expressed dissatisfaction over the slow progress and undue delay in completion of the Miao to Vijaynagar strategic road.

Assuring all possible support from the state government, he called upon the executing agencies and the contractors to expedite the construction work of the road by putting all resources together.

The work under Part V is yet to start.

Executing agencies have cited the difficult terrains, coupled with landslides at several locations, marshy lands, unfavourable climatic conditions and short duration of working period as the main causes of the delay. They informed that the stipulated date of completion of the road is fixed for December 2021.