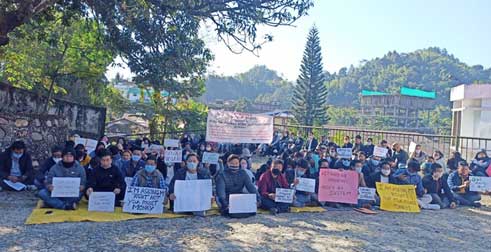 The employees said that they have not been paid for the last 11 months.

“The objective of our dharna is to receive our 11-month pending salaries. We had already approached the concerned authorities but it yielded no results. The issue of salaries kept pending has been recurring since 2012,” said APASA president Debia Taje.

“We have been left with no choice but to stage a dharna in front of the directorate office,” Taje added.

The agitated ATMA staffers also demanded a permanent solution to the irregular disbursement of staff honorarium and sought payment of 10 percent annual increment in emolument of functionaries as per ATMA Guidelines, 2018.

Later, the association called off the protest midway after assurances from the director of agriculture that their pending would be released within January this year.