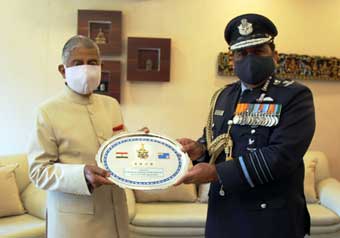 “Such initiative will motivate and encourage youth of the state to join the armed forces,” the governor said when the air chief marshal called on the governor here at the Raj Bhavan on Wednesday.

They discussed national security, recruitment of youth from the state and humanitarian missions of the IAF in the state.

The governor conveyed gratitude to the IAF for creating trust with the people of Arunachal Pradesh by their ever-ready emergency airlifts.

“Every citizen of the state is proud of the IAF,” he said.

While acknowledging the commendable proficiency and professionalism of the IAF in performing its assigned operational tasks, especially during medical emergencies and national calamities, the governor said that the IAF has always been very prompt in humanitarian missions.

“Our people look forward to continued assistance and indulgence of the IAF in their sustenance,” the governor said.

The IAF chief, who is on his maiden visit to the state, assured the governor of the best support and assistance from the IAF to the state of Arunachal Pradesh.

The air chief marshal also called on Chief Minister Pema Khandu  on Wednesday and assured  full support of the IAF “for Arunachal should it require any assistance.”

The IAF chief also assured cooperation for providing defence pilots to meet the shortage of pilots for fixed-wing civilian aircrafts to be operated for Arunachal.

During the meeting, discussions were held on advanced landing grounds for Dirang and Anini, to which the IAF officials responded favorably.

Expressing gratitude to the IAF for always being at the forefront in extending humanitarian assistance to the state, CM said the IAF has been very helpful, especially during the Covid-19 pandemic.

The CM  also assured all cooperation of the state government to the IAF in its defence preparedness.