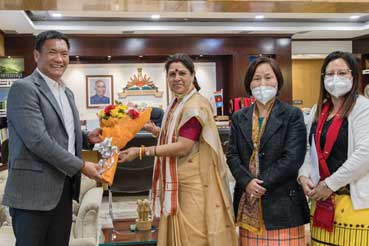 During the meeting, they discussed issues related to women’s rights and substance abuse among women.

Khandu said, “Women in Arunachal are better off yet have miles to go.”

On substance abuse, he said involvement of any uniformed personnel is being strictly dealt with.

When Arunachal Pradesh State Commission for Women (APSCW) members brought the issue of women’s equal rights over their parental property, the CM suggested a seminar to be conducted for raising awareness on the issue.

Earlier in the day, the NCW member called on Governor BD Mishra at the Raj Bhavan and discussed measures for reinforcing the security and wellbeing of the women in the state.

“By providing a source of livelihood, the Commission can guarantee better life for the hapless women,” he said.

The NCW member assured to take it up at the national level for appropriate implementation.