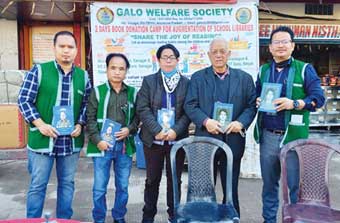 ITANAGAR, 6 Jan: The Galo Welfare Society Library Movement (GWSLM) has collected over 600 books during the two-day book donation camps organized in the twin towns of Itanagar and Naharlagun on 4 and 5 January.

The two days book donation camps with the motto ‘Share the joy of reading’ and ‘Let us inculcate and encourage reading habits among the children and youths’ was organized at Akashdeep and NE Departmental store in Itanagar and LK Hub in Naharlagun.

A total of 664 books were donated by 35 well-wishers from all sections of the society.

This mission has been conceptualized to inculcate and encourage reading habits among the school children and to augment the existing school libraries, said GWSLM in a release.

“There are many government schools which do not have a functional library because of which poor students do not get access to good books for their preparation for competitive examinations,” the release said.

“This library mission has been visualized to encourage such misguided children and youths to inculcate book reading habits so that they could shun their bad habits,” it said.

Expressing gratitude to all the book donors, GWSLM informed that the book donation drive will continue and those willing to donate books can contact the committee.

Additionally, it stated that consumption of drugs, alcohol, gutkas etc and misuse or overuse of smart phones by many children and youths of the society, which is detrimental for their health and studies, is one of a major burning issue concerning the society.

The GWSLM committee was constituted by GWS with Dr Pakngu Lombi as its chairman.