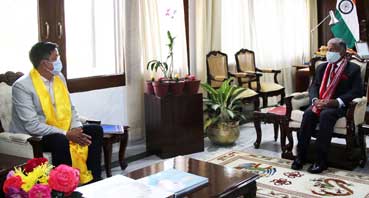 During a meeting with Tourism Minister Nakap Nalo and Tourism Secretary Sadhana Deori at the Raj Bhavan here, Mishra said “no slippage is acceptable in its completion timeframe.”

The governor said that Parasuram Kund is one of the most sacred places for pilgrimage in the country and large numbers of people, including believers and tourists, visit the holy site throughout the year.

“To make the place convenient for the visitors, and at the same to maintain the sanctity, an inclusive development of the kund was proposed by the state government and Rs 3,787.74 lakhs have been sanctioned for it by the central government,” he said.

He said the site, which has immense religious importance, “will have huge beneficial impact on the socioeconomic development of the area and boost the sources of livelihood of the local people.”

Mishra said that the fund provided “must on the ground be strictly utilized as planned in letter and spirit.”

He suggested that the PWD’s Design & Planning CE Atop Lego, who has been working on the survey and investigation, may be asked to assist in the implementation of the project.

Nalo assured the governor that he would personally monitor the project. “Once completed, the project will enhance the tourism sector in the state,” he said. (Raj Bhavan)