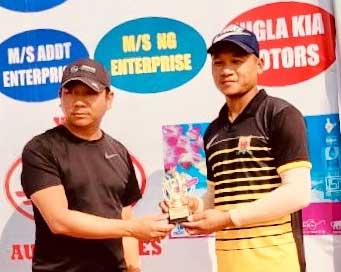 While chasing the target, Mengio were all out for 60 runs in 15.4 overs.

Tiklee, who also contributed a rapid 58 runs from 35 balls to his team’s total, was declared man of the match for his all-round performance. His knock was studded with four sixes and five fours. He also became the first player to claim a hat-trick of wicket in the ongoing tournament.

Sangdupota batted first and set Parang a target of 135 runs to chase. Parang were bowled out for 123 runs in 19.3 overs.

Tadar Piter of Sangdupota was chosen for the man of the match award for his four-wicket haul.