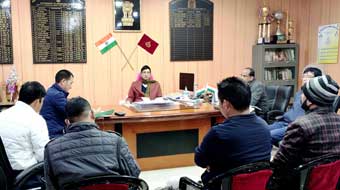 KHONSA, 12 Jan: Tirap Deputy Commissioner Taro Mize has called upon the contractors to complete the Pradhan Mantri Gram Sadak Yojana (PMGSY) projects within the stipulated time as per specification in the district.

Presiding over a review meeting of the progress of the PMGSY Phase-I and Phase-II projects here on Tuesday, the DC told the RWD officers and contractors to bring the local issues hampering the progress of works to the concerned administrative officers and to him for amicable solution.

He asked the RWD technical officials to regularly supervise the projects and provide technical support during implementation of the projects to avoid future complicacy and also asked the contractors to increase the human resources and machinery for the completion of  project within  31 March.

Earlier, Khonsa RWD EE Nending Bath informed that the projects under PMGSY phase-I and phase-II will be frozen by the government from 31 March this year and before that ‘the projects should be completed physically and financially.’

The DC  further urged  the RWD EE and concerned contractors to expedite the  police housing projects within the time-frame and hand over the completed schemes to the user agencies.