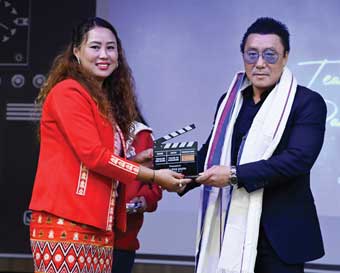 NAHARLAGUN, 16 Jan: The trailer of the film Tears in Paradise was launched in a city hotel’s conference hall here on Saturday.

Wishing that the film would be a grand success, former MLA Likha Saaya said that films are known as mirrors of the society.

“Through films, real stories of society can be shown to the outside world, which will also impart awareness and knowledge,” he added.

“Today, the digital system plays a crucial role in mass media, and films also play an important role in society for development to take place in the present day,” said Saaya.

Stating that making films in the state is very difficult due to scarcity of marketing networks, he appealed to the film’s team to “provide a good logical story about the tradition and culture of the state, so that the younger generation can carry forward.”

He also said he anticipated that one day Arunachal would become a hub of films and generate employment for talented artistes.