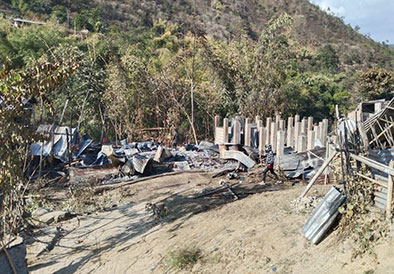 TAPIRIJO, 17 Jan: Three children, aged 4, 8 and 12, were reportedly charred to death in a major fire accident that broke out in Tapirijo village in Kamle district on Saturday night.

Sources in Boasimla informed that the minors who died in the accident were siblings.

It is said that the accident broke out at around 11:30 pm, engulfing four private houses and the post office building, reducing them to ashes. The villagers had to damage two private houses in order to control the fire from spreading.

Sources further said the fire started from one Kabak Tamo’s residence, the father of the three deceased minors. Tamo was reportedly in Palin and his wife was fasting in a church when the fire broke out.

The cause of the incident is yet to be ascertained.

The postmortem of the charred bodies was carried out at the Boasimla PHC and the bodies were later handed over to family members.

Expressing shock over the unfortunate incident, Chief Minister Pema Khandu deeply mourned the loss of the three minors. He conveyed his condolences and prayers to the bereaved family members.

Assuring all possible support to the victims, Khandu announced an ex gratia relief of Rs 4 lakhs each to the deceased. He asked the district administration to immediately process the ex gratia relief. He further appealed to the people to stay cautious and take precautions to avoid any such accidents.

The district administration and the police, headed by the ADC, the DDMO and the OC, rushed to the accident site to take stock of the situation. They provided immediate relief materials like ration, blankets, utensils and cash to the victims.

People from all walks of life came forward to provide relief assistance to the victims as nothing could be retrieved from the houses.

Further, members of the Kamle unit of the Nyishi Elite Society and the Kamle Area Employees Association visited the spot and handed over cash to the fire victims as immediate relief. They also appealed to the local MLA and the district administration to set up fire stations in Raga, Boasimla, Ligu and Dollungmukh to control such incidents in the future.

It is reported that there is no fire brigade in entire Kamle district (With inputs from DIPRO).