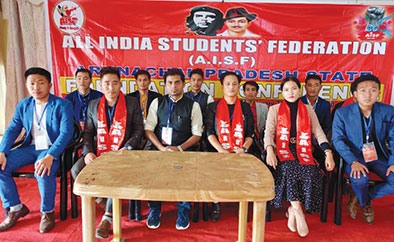 ITANAGAR, 17 Jan: Making a formal entry into the political arena of Arunachal, the All India Students’ Federation (AISF) – the student wing of the Communist Party of India (CPI) – was launched here on Sunday with the formation of a state council.

Speaking to the press, AISF national president Shuvam Banerjee, termed the day “historic” and said a new kind of students’ politics will be witnessed in the state.

He further said that a 71-member state council has been formed.

“Representative from seven districts presented their political views. But altogether representatives from 16 districts took part in the meeting. Within the next three months, we will form a district council in all the 25 districts of the state,” said Banerjee.

During the programme, the members discussed at length the two main points, which are privatization of education and the role of students’ unions in colleges and universities.

“Public education system must be strengthened as the majority of people are dependent on it. The rampant privatization of the education sector will hurt the poor. The AISF will continue to raise concern on this issue,” he said.

Further, the AISF national president said that there should be student union representatives in every college and universities.

“They should be democratically elected,” said Banerjee.

He also informed that a national council meeting of the CPI will be held from 29 to 31 January in Hyderabad, Telangana.

“I will present a report of the formation of the Arunachal state council of the AISF. After that, the national council will take a decision whether to form CPI in the state,” he added.

The president of the Arunachal council of the AISF, Lee Yumlam, said that all the members of the state council are committed towards the CPI ideology and are raring to work for the people of the state.

“Soon we are going to conduct a blood donation camp in the capital region, which will be our first programme. There are many other activities in the works. We will also make an effort to form councils in all the 25 districts at the earliest,” said Yumlam.