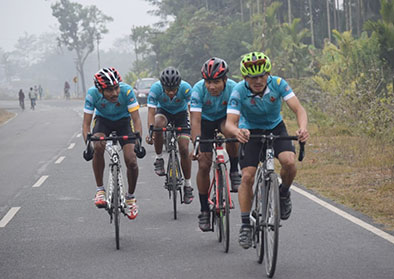 MIAO, 17 Jan: Sports Minister Mama Natung predicted that Arunachal would emerge as a major sports power in the country in the next 15 to 20 years.

“The state government under the leadership of Chief Minister Pema Khandu is committed to take the state to a greater height, especially in the sports sector,” Natung said at the closing ceremony of the Pangsau Pass Challenge here in Changlang district on Sunday.

The minister said his department will do the needful to ensure that the biking event is promoted and funded by the government, so that it can be organized in a bigger way annually.

Nampong-Jairampur MLA Laisam Simai said the youths of Changlang district have inborn sports talents and have made everyone proud by winning several football tournaments and medals in various other sport events in the recent years despite lack of facilities.

He exuded confidence that Arunachal would continue to march ahead in sports and other sectors under the leadership of Khandu.

“The sole motto of introducing the cycling event was to give the riders an opportunity to explore the beauty of eastern parts of the state,” said local MLA and UD Minister Kamlung Mossang.

He assured to organize the event in a bigger way next year.

Cash prizes with mementoes were given away to all the cyclists.

Devender Thakur from Himachal Pradesh, a national champion, won the challenge. He was awarded Rs 50,000.

Akbar Insmael Khan from Kashmir was the runner-up. A two-time woman cancer survivor from Meghalaya was among the 30 riders.