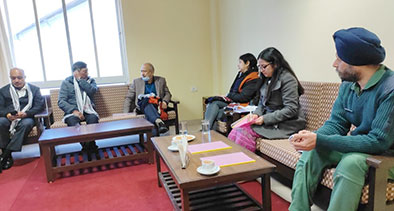 discussed the roadmap for starting a 19-seater Dornier aircraft on the ALG by using the existing infrastructure.

Deputy Commissioner Swetika Sachan was directed to complete the refurbishing work and to acquire land for construction of a permanent civilian terminal adjacent to the ALG by 31 March.

During the meeting, it was decided to establish an observation tower in Potin to facilitate weather clearance.

The team further discussed issues pertaining to the security of the ALG, approach road to the civil terminal, drainage around the ALG, and land acquisition for the permanent civil terminal.