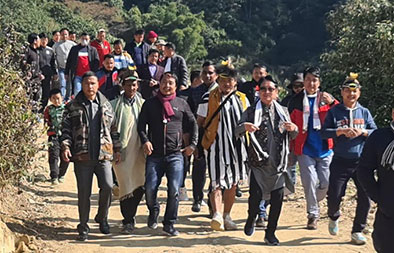 CHAYANG TAJO, Jan 20: Local legislator Hayeng Mangfi has called for better cooperation from the public for the speedy development of Namchar, Soshi and Doripu villages in Chayang Tajo circle of East Kameng district.

He was speaking as the chief guest at a felicitation programme for the newly selected panchayat members of Namchar Bagang gram panchayat constituency – organized by the Namchar Soshi and Doripu Village Welfare Society (NSDVWS) in Namchar village on 17 January.

Mangfi assured to look into the demand for a community hall.

The society during its first general conference held at Namchar Bagang on 16 January also called for a blanket ban on hunting, fishing and extraction of forest products from Namchar, Soshi and Doripu villages by outsiders.

To prevent the drug problem, the society has decided to create awareness on the negative impact of drug abuse among youths and to hand over drug dealers to the police as part of the anti-drug strategy.

To stop early marriage among teenagers, the society has set the minimum age of marriage at 22 years for women and men.