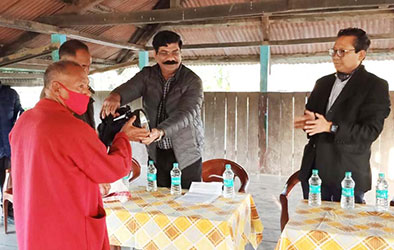 The Kotga Gora Society had earlier placed a community afforestation scheme to the PCCF office, covering a 1,000-hectare area in Namsing, Mer, Gadum and Paglam villages on the left bank of the Siang river.

Interacting with the local villagers, the PCCF urged them to restrain deforestation and hunting activities, saying that declining forest cover and wildlife hunting are causing natural disasters which are posing a serious threat to human habitations.

Speaking about mitigation of man-elephant conflict, the PCCF asked the people to save the elephant routes in Mebo.

There is a wild elephant corridor linking the Mebo reserve forest with Daying Ering Wildlife Sanctuary and the Poba reserve forest on the Assam-Arunachal boundary in the downstream area.

He suggested to the villagers to adopt community plantation on the riverbanks in order to protect their land from erosion.

Responding to a memorandum submitted by KGCCRS president Gumin Tayeng, the state’s forest department head assured to provide necessary help with financial assistance for the community forest in Mebo.

The PCCF also commended the gaon burahs for mobilizing the rural people to surrender their air guns, which he termed the most effective step to check wildlife hunting.

He later distributed flashlights and umbrellas allotted by the forest department among the local gaon burahs.

The PCCF was accompanied by Pasighat DFOs Tasi Mize (T) and Tasang Taga (WL) and other officials.