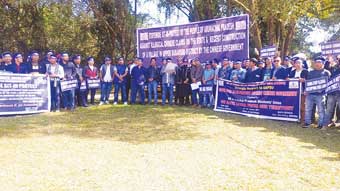 ITANAGAR, 28 Jan: The All Arunachal Pradesh Students’ Union (AAPSU) on Thursday staged a statewide sit-in protest against China’s claim over Arunachal and Chinese incursion into the Arunachal side of the McMahon Line by establishing a village in Upper Subansiri district.

The federating units of the AAPSU also staged sit-in protests across the state.

“AAPSU is organizing this protest rally across the state with two objectives. First, we outright reject the repeated claims by China on the land of Arunachal Pradesh,” said AAPSU general secretary Tobom Dai, addressing the gathering at IG Park here.

Dai said the other objective of the sit-in protest was to express resentment over the central government’s “lethargic and half-hearted approach” towards the issue.

“This issue has been ignored for so many years. AAPSU has been protesting over it for many years. This issue is not a new issue,” Dai said, adding that the AAPSU is frustrated and anxious over it.

“You are our representatives. You should have the courage to speak about the things developing in the state,” he said.

The AAPSU demanded that the prime minister announce a development package and aggressively push for the development of Arunachal, the way China is doing on the other side of the border.

AAPSU president Hawa Bagang in his address said, “Our land is in danger. We cannot remain silent. We need to speak up. We are not against any political party, but we are here for our territorial integration,” he said.

Bagang further claimed that India has lost several areas in Arunachal since the 1960s.

“When will you build roads and infrastructures in the border areas?” Bagang asked the central government. He claimed that, due to lack of road communication in Arunachal, many villagers have left their villages and are “choking the township areas,” and urged the Centre to push for the development of the villages.

“Had this issue happened in Jammu & Kashmir and Ladakh, they would have treated it differently. Stop political blame game. It is your duty to correct the blunder of the Congress,” Sonam said.

“If China can build a model village across the border, why cannot India build roads on our side?” Sonam said.

The report of China having constructed a model village on the Indian side in Limeking area of Upper Subansiri district surfaced in the media early this month. It created an uproar among the citizens. Parliamentarian from eastern Arunachal, Tapir Gao raised concern over China’s advance towards Indian territory in Arunachal.