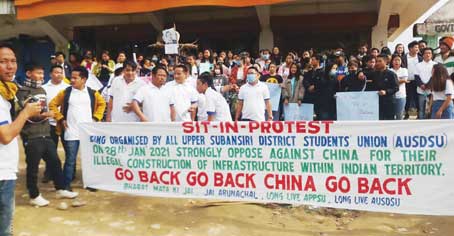 AUSDSU president Yade Natam criticized the Indian government for not offering any clarification to the indigenous people on the issue as the news of Chinese activities in the border area has created panic among the populace.

She further said, “Upper Subansiri district is facing the problem of poor road communication, and despite bringing the issue to the knowledge of union minister Kiren Rijiju in the form of public memoranda and representations, no action has been taken to address the same.”

“People have been requesting the state government to construct the road from Mebigeko in Upper Subansiri to Gerukhamukh in Assam, which is not only in the interest of the general public but is also important from the defence point of view. However, there is no response from the government,” she added.