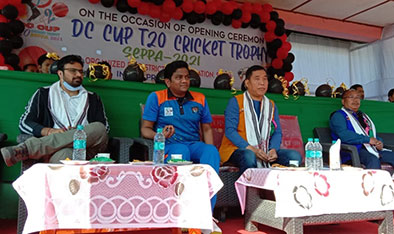 Eight teams are vying for the trophy.

Local MLA Tapuk Taku, who declared the tournament open, exhorted the participants to play the games with true sportsman’s spirit by following the rules and regulations and maintain discipline.

Taku highlighted the benefits of playing games and sports and urged the seniors and parents to guide the younger generation to imbibe socially acceptable qualities and adopt the mantra of hard work and perseverance in order to achieve something fruitful in life.

The MLA also highlighted the various sportsperson-friendly programmes and policies of the government, including job quota and cash awards for meritorious sportspersons. He advised the players to grab the opportunities by excelling in their chosen sports.

DC P Pravimal Abhishek advised the players to become champion in the true sense “by displaying persona of great human beings, both on and off the field.”

Abhishek commended the sportsmanship spirit of the people of the district and assured the participating teams that the tournament would be continued in the future too.

Advising the youths to stay away from bad habits, the DC assured to extend all possible assistance to uplift the games and sports activities in the district and announced to conduct more such kind of sports events in the coming days.

Highlighting the benefits of playing sports, EKSWCO general secretary Boru Sangyu urged all to support and promote games and sports. He also urged the participating teams to play the game by maintaining rules and regulations and discipline.