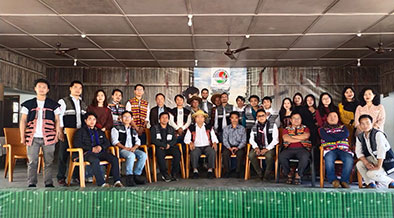 The IMSFP is a collaborative pilot project of IMCLS with the Nature Conservation Foundation (NCF), Mysore.

The main objective of the project is to preserve and continue the Igu (shamanic) tradition.

IPD-Igu(IMCLS) chairman Dr. Rajiv Miso said, “The Igus hold the most important place in the Idu Mishmi culture. They lead traditional practices around all key activities in an Idu person’s life, right from birth till death. These include, but are not limited to, the birth ritual, healing rituals, well being rituals, construction of a house, marriage, rituals around harvest and preparation of agricultural fields, Reh festival, and funerals.”

“Presently, the institution of Igu among the Mishmis (Idu) is dying with declining trend in quantity and quality where younger Idus are not naturally self-initiating as Igu. In the past there used to be more than two Igus in a village. As per data there are only 80 Igus remaining in the whole Mishmi (Idu) region for approximately 14,000 souls, out of which only 43 are fully equipped Igus. In the present scenario, an Igu has to make hectic visits to two or more villages. Moreover, individuals have to summon Igus from far areas. The decline of Igus will ultimately result in the vanishing of the ancient sacred oral narratives and knowledge of the community.”

“This long tradition of chaste oral narratives is gradually dying with passage of time along with the diminishing number of Igus for want of proper attention. It has also been revealed that the health of the few remaining Igus is also affected due to the rigorous schedule. The situation needed urgent remedial measures and thus, the IMSFP was initiated”.

As a first attempt which will determine its success, this practice based apprenticeship programme will have two Igus, Igu Mola Mili from Lower Dibang Valley and Igu Sipa Melo from Dibang Valley, under whom one each apprentice will train for two years to become a full- fledged Igu. They will learn full-time by staying with their Igu guides and follow them, whenever summoned for rituals. During this period, the Igus will receive monthly honorarium and the apprentices will also receive wages. The project will be community funded.

Dr. Miso said that the students will be closely monitored during the training period, and if successful, a full-fledged course will be put in place to train more interested youngsters to become Igus.

“This project seeks to support younger Idus to take up Igu as spiritual and economic livelihood and to create broad interest of the community in the institution,” he said.

IMCLS (Dibang Valley) vice president Robert Rondo said the launch of the programme was a historic moment because becoming an Igu is a natural selection process, but this will be an attempt to train an apprentice into becoming an Igu. He added that this was a necessary step to revive the decaying Igu institution.

IMCLS general secretary Rao Dele advised the apprentices to be dedicated and determined, and to observe all the sacred taboos strictly during the training period.

“There is no scope for failure so we should collectively work for the success of this project,” he said.

The MoU for the same was also signed on the occasion.