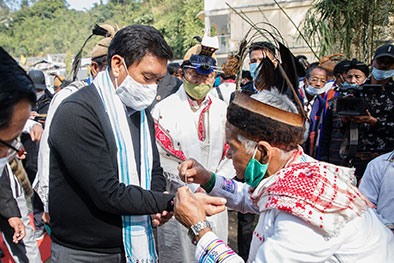 ITANAGAR, 1 Feb: Chief Minister Pema Khandu on Monday said that his government is committed to support preservation of indigenous culture and revival of the institution of priesthood in Arunachal.

Khandu said the Directorate of Indigenous Affairs (DIA) was established with the sole purpose of preserving and promoting cultural heritage of the indigenous communities of the state.

“Our culture is our roots. If roots are not protected and made stronger, the tree above will not survive. Hence, for our communities to survive, culture has to be preserved,” Khandu said at the inaugural function of the 15-day seminar-cum-workshop of priesthood at the DIA office premises here.

The chief minister expressed concern over dwindling existence of the institution of priesthood, which is an integral part of indigenous culture.

“For centuries, we depended on our local priests for every ritual – be it at birth, death, sickness, disasters or even construction of house. Every auspicious occasion revolved around the priests. I commend the department for organizing this seminar-cum-workshop and believe that it would play a pivotal role in reviving this very important institution,” he said.

According to him, one of the major reasons for the dwindling of priesthood is lesser use of native languages.

“Without a written script, almost all our native languages are only spoken and passed on orally. With modern education and exposure, the younger generation is getting away from their native tongues and it has become a major concern for us,” he pointed. He urged the elders and parents to speak in their native tongue to their children at least when they are at home.

Khandu offered assistance from the government to researchers and academicians to develop scripts for the native languages spoken in the state. He also asked the education department to introduce textbooks for pre-primary level classes on Arunachal Pradesh, its people and culture.

In the meantime, Khandu also reminded the followers of indigenous faiths not to ‘compete’ with followers of other faiths as India being a secular country every individual is free to follow or believe any religion.

Advocating ‘change’ with time, Khandu said practices that do not suit equally to all must be altered or replaced. He said, ‘believing and following a faith shouldn’t be a liability but liberating.’

Responding to a memorandum submitted by Priest Association of Arunachal Pradesh president Hari Taro, the chief minister assured that honorarium would be provided to the priests as assured by the government. He directed the DIA to study and recommend the criteria for disbursement of honorariums to all indigenous priests of the state.

He further assured that other demands, like corpus fund for the association, annual meet of priests from across the state, celebration of festivals etc, would be taken care of by the department. Khandu said sufficient budgetary support will also be provided this financial year.

During the 15-day seminar-cum-workshop, discussions will be held on various topics, like evolution of indigenous priest, ritual of naming of newborn child, rituals of marriage and death, traditional healing, priesthood for posterity etc.