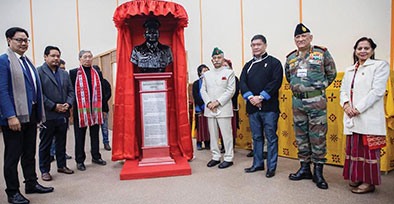 Major Bob Khathing, a forgotten hero is a Thangkul Naga from Ukrul district of Manipur, who brought Tawang under the Indian Territory on 14 February, 1951.

Terming the ceremony as historic, Khandu said, “The contribution given by Major Bob Khathing was immeasurable. I have no words to express our gratitude to Bob Khathing”

“This museum is to give tribute and honour to Bob Khathing,” Khandu said.

Khandu informed that he is planning the inauguration of the Bob Khathing Memorial on  9th February, the same day when Bob Khathing formally set up the administration at Tawang by inviting  all chief ministers of  the Northeast states.

Villagers of Gyangkhar, the native village of Khandu, will donate land for the memorial.

Governor BD Mishra in his speech said that “the picture of Tawang would have been different had Bob Khathing not hoisted the national flag in Tawang 70 years ago.”

The governor shared how the idea of honouring Major Bob Khathing came and was initiated by CM Khandu.

The governor further opined that the Bob Khathing Memorial would motivate and inspire the young generation and would remain a symbol of national integration and bravery.

Appreciating Khandu for honouring Major Bob Khathing, Meghalaya Chief Minister Conrad Sangma said that Khandu has shown the path to give due recognition to forgotten heroes which other chief ministers of the North East states should follow.

“There are many heroes from the northeast who have never been recognized and honoured  but now time has come for us to recognise our heroes who sacrificed for national integration,” said Sangma.

Union Minister of State for Youth Affairs and Sports, Kiren Rijiju in his speech said he would ensure Major Bob Khathing’s history is included in school and college textbooks.

Rijiju further appealed to the journalists and columnists to not just read about Bob Khathing but also to write about him and tell his heroic tale to the world.

Recalling the history of Major Bob Khathing’s Tawang expedition, an  arduous task entrusted to him, CDS Bipin Rawat said, “Major Bob Kathing hoisted the national flag at Tawang and made this part of the Indian Union. To talk about such great personality and hero; it is too heavy for me. “

“The country would be proud of this monument,” the CDS added.

CDS Bipin Rawat assured full support from the Indian Army’s side to build the museum of Bob Khathing.

Sharing a brief biography of his hero father, John Khathing, a retired Indian Revenue Service (IRS) officer said, “He loved Tawang. He was a broken man when he came to know that the PLA overran Tawang in 1962 war”.  He revisited Tawang in 1985 and gave an interview to the All India Radio expressing his joy to see Tawang’s development, John added.

“Our relationship with Tawang will never fade,” John said. He also said that his late father was instrumental in creating the Shastra Seema Bal (SSB) in Arunachal (then NEFA).

Major Ralengnao Bob Khathing was a multi-disciplinary man. He served as a student leader, teacher, army officer, politician, administrator and ambassador. He was the first tribal ambassador of India to any foreign nation. He died on 12 January, 1990 at Mantripukri, Imphal.