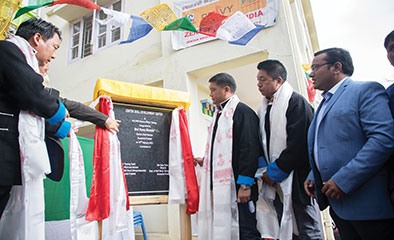 TAWANG, 14 Feb: Chief Minister Pema Khandu said that people’s perception on hydropower is changing gradually in Tawang with delegations from public and student communities recently meeting him demanding the construction of hydropower projects in the district be revived.

He said this while dedicating the Zentek Skill  Development Centre to  the people of Tawang recently.

“With the coming of hydropower projects in the district, employment and work opportunities will open up for people with work skills. Major components in hydropower development will be in construction,” the CM said as he appealed to the youths to acquire necessary skills to find employment with the companies.

CM said the state government is focused on skilling youths, as its importance will continue to grow in the coming days.

Appealing the youths to get enrolled in skill training courses, the CM said the future belongs to those who have work skills.

Informing about the initiatives by the state government in the skilling sector, the CM said that five ITIs are functional presently in the state, with four in completion stage and five more in the pipeline. He also informed that 55 units of training centres are fully functional across the state.

Under PM Kaushal Vikas Yojana, the CM informed that about 15, 000 students have been trained in different skilling programmes, while under the Chief Minister Yuva Kaushal Yojana, more than 200 students have also been provided training in the high-end skill sectors.