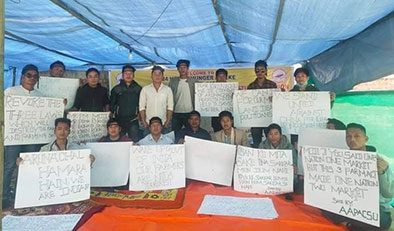 ITANAGAR, 14 Feb: The All Arunachal Pradesh Anti-Corruption Students’ Union (AAPACSU) on Sunday organized a 24-hour hunger strike here in IG Park demanding that the central government reclaim the land allegedly captured by the Chinese government in Upper Subansiri district and the repeal of the three contentious farm laws.

Speaking to reporters, AAPACSU president Tana Ganesh Tara said that the demands put down by the union are in the interest of the country. He said that the repeated incursion from China in the country should be solved at the earliest.

“This is a serious issue and it should be solved before it creates further tension in the border areas of the state,” he said.

He said that China has already built a village on the banks of River Tsati Chu, which lies in Upper Subansiri district of the state.

“The village is constructed within the territory of the state and the central government should take measures to tackle such incursion,” he said.

Tara also said that the union is ready to sit on a hunger strike at New Delhi in the matter of Chinese incursion in Arunachal.

Extending solidarity to the farmers seeking repeal of the three farm laws, Tara said that the voice and concerns of the farmers should be heard.

“The farm laws have been passed for the interest of the big corporations. It will only benefit them (Corporates) and yield nothing for the farmers of the country,” he said, adding that farm laws should be scrapped at once.